Excellerate Bioscience is thrilled to welcome Leigh Stoddart to the team as Associate Principal Scientist.

A specialist in the development and application of fluorescent ligands to study G protein-coupled receptor pharmacology, Leigh will strengthen the molecular pharmacology expertise within Excellerate. In her new role, she will be involved in performing research and coordinating a number of projects within the company and will also play a key role in a project recently funded by the Eurostars competition.

Having obtained both an MScI in Biochemistry and a PhD in Molecular Pharmacology at the University of Glasgow, Leigh moved to the University of Nottingham in 2009 as a post-doctoral researcher, where she has spent the past 12 years gaining extensive experience in the application and development of fluorescent ligands to study GPCR pharmacology.

During her time at the University of Nottingham, Leigh co-authored over 35 publications, including a key publication in Nature Methods, where she described the first use of NanoBRET technology to monitor ligand binding at GPCRs. Leigh was also a key participant in the EU Kinetics for Drug Discovery (K4DD) program, which involved collaborators in large pharmaceutical companies, SMEs and academia. Through her involvement in the K4DD program, she published a number of high-profile papers on the kinetics of ligand binding to GPCRs. 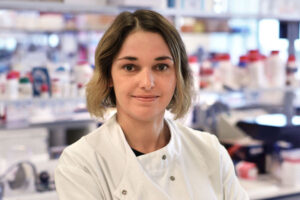 Commenting on her appointment at Excellerate Bioscience, Leigh said: “Excellerate is a growing and dynamic company, and it is a really exciting time to be joining the team. The position of Associate Principal Scientist will allow me to apply and develop my expertise in GPCR pharmacology and ligand binding, as well as gain experience in a number of aspects of the drug discovery process.”

Excellerate Bioscience’s Chief Scientific Officer, Nicholas Holliday, added: “Excellerate Bioscience is built on a worldwide reputation for excellence in the field of molecular and cellular pharmacology, and that reputation is no doubt down to the fantastic team we are building here. I am thrilled to welcome someone as capable and experienced as Leigh to the team at Associate Principal Scientist and can’t wait to see all that she will accomplish.”